Conduct secondary research, competitive feature analyses, and interviews to inform design and content decisions for an app that helps people tell their pregnancy stories through directed journaling and narrative visualization.

As part of the UX Research & Design Mastery Course at the University of Michigan (SI*699), my team and I are in the process of developing an app that helps people tell their pregnancy stories through directed journaling and narrative visualization, offering tailored support resources and access to community forums in cases of loss.

This project started as a way to address the often unconsidered experience of pregnancy loss for users of pregnancy-tracking apps. Up to 20% of known pregnancies result in loss, but most apps aren’t designed to handle this use case in a dignified, careful way or even at all.

In a 2018 Mashable article, Olga Massov wrote that, after experiencing a miscarriage, that “it wasn’t until [she] logged onto the app’s website on [her] computer that [she] discovered there was no option to label a pregnancy ending in a miscarriage. [She] could either delete the pregnancy entirely or let the app believe [she] was still pregnant.” Another article, in The Atlantic, recounts the experiences multiple women have had after experiencing pregnancy loss: “she [Cindy Jenkins] found the process of getting rid of her Glow account to be cumbersome, which only amplified her pain. ‘It should have been easier to figure out how to ‘report a loss,’ which is what they call it,’ Jenkins told me.”

So, with this project, we aimed to pick up where most pregnancy-tracking apps fail: handling cases of early or unexpected pregnancy loss in dignified ways—not treating them as edge or stress cases, but as normal, expected use cases—and designing a solution that thoughtfully facilitates or provides relevant support, space, and healing.

We started by conducting a competitive feature analysis of the 10 most popular pregnancy-tracking and fertility/period-tracking apps across the App and Google Play stores. For each app included in our analysis, we noted which common features were present and how it handled instances pregnancy loss, if at all.

This analysis revealed a consistent lack of support from apps in addressing pregnancy loss. In the worst cases, some apps don’t allow users to report a loss and thus force them to abandon or delete the apps completely.

More frequently, however, apps allowed users to report a loss, acknowledging the loss by offering a sympathetic message. 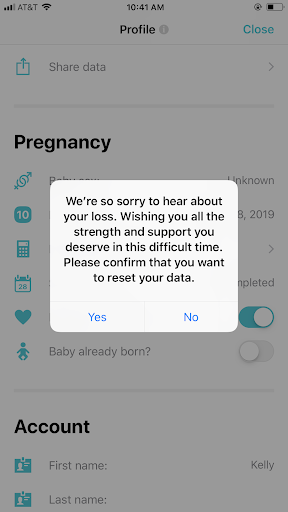 This doesn’t address the issue at hand, though, as these apps are quick to advertise their companion fertility tracking app or suggest that the user come back when they’re “ready to try again”. 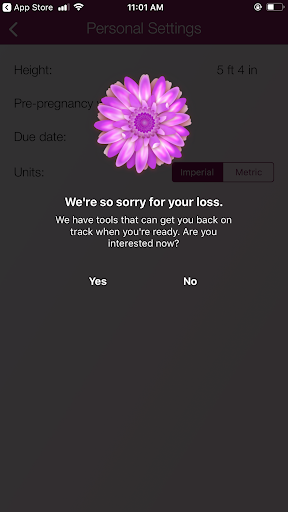 From our secondary research, we learned about the unique grief process associated with pregnancy loss, the symbolic and often multifaceted nature of this type of loss, and best practices for supporting people experiencing this type of loss, including memorializing the loss, receiving emotional validation from professionals, getting information from and having contact with professionals, receiving emotional validation from peers, and making meaning of the loss.

We used Qualtrics to create our survey and then distributed the survey via social media platforms (Facebook and Twitter), a school-wide listserv, and /r/miscarriage on Reddit.

Our goal was to collect 30-40 responses, but we exceeded our goal, gathering 99 completed surveys from respondents in five different countries. We decided to analyze the data of the 89 respondents in the United States only to avoid potential skewing due to any possible cultural biases or differences.

Since our survey was comprised of questions with categorical answers, we analyzed our respondents’ answers using frequency tables, bar charts, and cross tabulation.

Most of our respondents were between the ages of 25-34 and 98.9% indicated being pregnant in their lifetime. Of those who indicated a pregnancy, 94.3% reported using a pregnancy-tracking app. The most used features of these apps were growth-tracking visualizations, symptom/health trackers, and educational articles.

Of those who used a pregnancy-tracking app, the vast majority (92.77%) rated their app as at least somewhat helpful. This finding helped us narrow the scope of our solution: it would be unnecessary for our solution to include revamped versions of features that are already well-received, like growth-tracking visualizations.

Between February 4, 2019 and February 15, 2019, we interviewed eight people who fit into two groups that we were interested in:

We conducted these interviews using various remote interview methods (by phone, Bluejeans, or Google Hangouts) and followed semi-structured protocols to guide the conversations. Once complete, our interviews were transcribed via Otter.ai, and we each then distilled detailed notes from these transcripts.

We crafted a digital affinity wall to make connections between the experiences, ideas, thoughts, feelings, and opinions brought up by interview participants. Once we had completed interviews and added notes to the affinity wall, we drew thematic connections between all of our notes to support various significant findings we subsequently used to inform our design requirements.

From our interviews, we learned

After snynthesizing data from these four research methods, we derived UX requirements for our solution and prioritized each (either “must have”, “should have”, or “nice to have”, in decreasing order of importance) according to our findings.

1. Must have: Create a separate space for healing after a pregnancy loss – avoid pushing users immediately back into a fertility- or period-tracking solution.

2. Must have: Provide ways to users to make sense of their loss.

3. Must have: Avoid “magical thinking” – don’t avoid communicating the hard truths about the prevalence and pain of pregnancy loss, in addition to other complications associated with pregnancy.

4. Must have: Don’t “reinvent the wheel” – don’t include features that are currently well-established in popular pregnancy-, period-, and fertility-tracking periods.

5. Should have: Provide actionable advice that helps users address the psychological, emotional, and mental effects of pregnancy loss.

6. Should have: Provide educational articles and other tools that help users stay informed about the physical effects of pregnancy loss.

7. Should have: Provide ways to communicate with others who’ve experienced pregnancy loss, whether in a user’s social circle or not.

8. Should have: Provide ways for users to memorialize their loss.

9. Nice to have: Use dignified, clear, validating language – no niceties.

With a common understanding of what our solution should include, our team engaged in exploration: each of us sketched what a potential successful solution might look like. After discussing the merits and drawbacks of each, we landed on a design concept that was a sort of mixture of all our ideas.

Our solution, Expectant, helps people tell their pregnancy stories through directed journaling and narrative visualization. Specifically, Expectant is an app; as our original motivation for exploring this project space was to address the often unconsidered experience of pregnancy loss for users of pregnancy-tracking apps, it seems appropriate that our solution is also an app.

This app, Expectant, could be used by anyone at the start of their pregnancy.

During onboarding, a user is asked

From there, users can engage in directed journaling — they’re given prompts about what they’re most excited about for their child, what parenthood means to them, etc. To respond, users can type directly into the app; upload documents, audio, video, or photos; or natively record audio or video or take photos. (They can save, edit, or delete responses at any time, too.)

After on-boarding, each subsequent use of the app will ask the user whether to want to 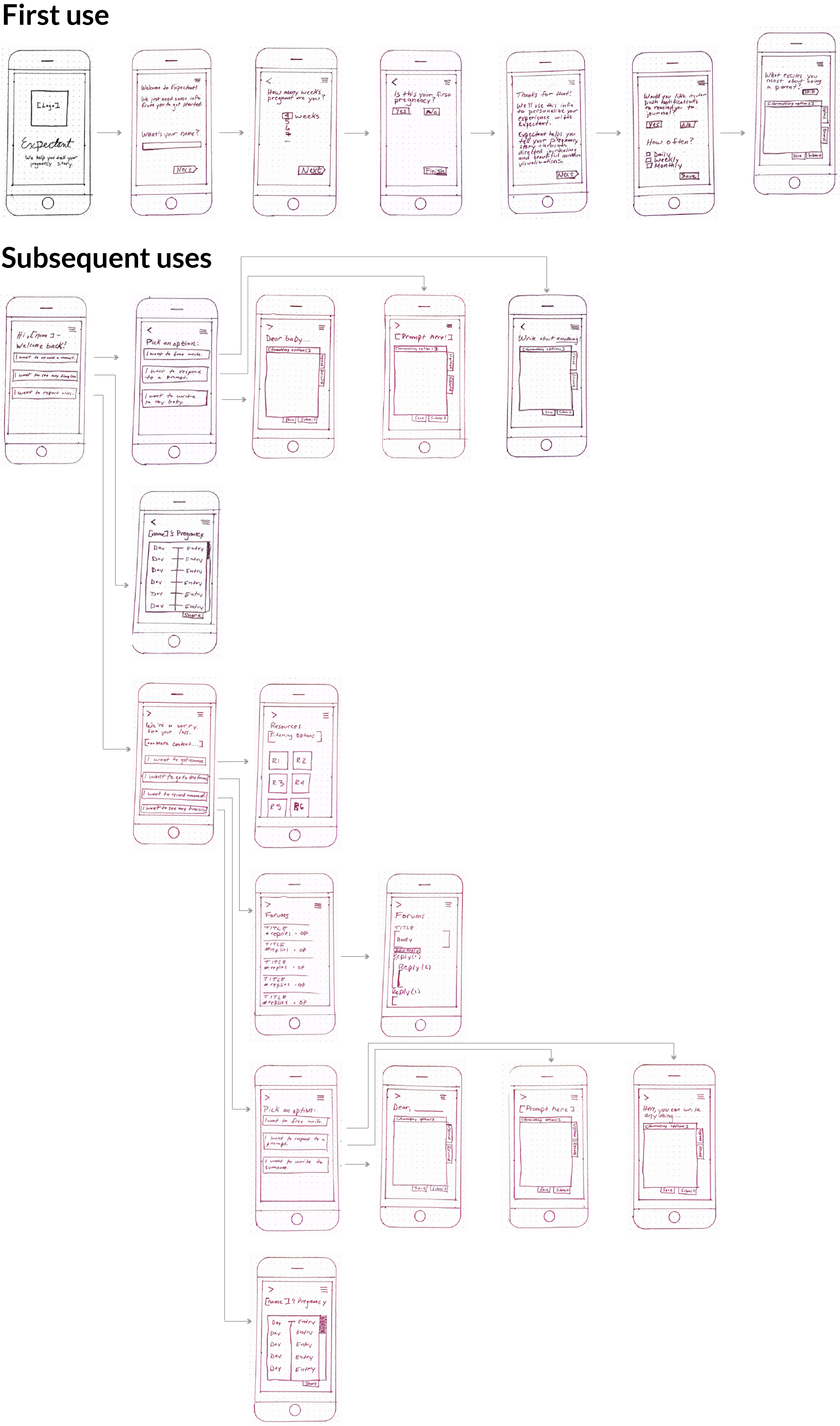